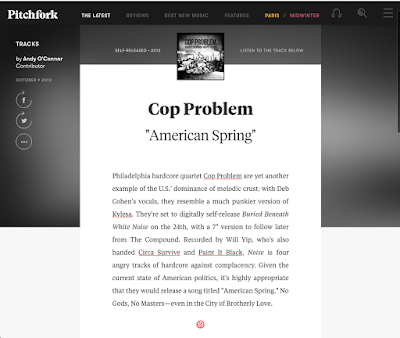 "Philadelphia hardcore quartet Cop Problem are yet another example of the U.S.' dominance of melodic crust; with Deb Cohen's vocals, they resemble a much punkier version of Kylesa. They're set to digitally self-release Buried Beneath White Noise on the 24th, with a 7" version to follow later from The Compound. Recorded by Will Yip, who's also handed Circa Survive and Paint It Black, Noise is four angry tracks of hardcore against complacency. Given the current state of American politics, it's highly appropriate that they would release a song titled "American Spring." No Gods, No Masters—even in the City of Brotherly Love." - Pitchfork.com (Andy O'Conner October 9, 2013) 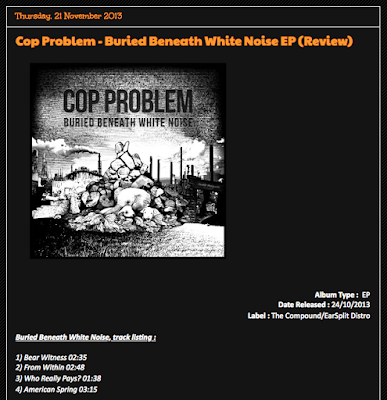 Cop problem quite frankly rule. They manage to sound fresh within the confines of a sound that is by no means the same - this has been done before many times. They're not out to reinvent the wheel, but they are interested in running the fucker into the ground. Check them out today. (Nov 21, 2013: The Sludgelord : Matt Fitton)

"Milwaukee’s morose hardcore/punk outfit, ENABLER, and Philly’s activism-driven hardcore d-beaters, COP PROBLEM, have both been added to the opening night of this year’s installment of the massive New England Metal & Hardcore Festival, with a regional run of live dates being locked down flanking the gathering..." FULL ARTICLE


CvltNAtion.com: DISCHARGE Hear Nothing See Nothing Say Nothing: The CVLT Nation Sessions: January 16, 2014

"CVLT Nation is proud to present the first covers compilation in our series The CVLT Nation Sessions: DISCHARGE’s seminal album Hear Nothing See Nothing Say Nothing. We’re offering it for free download and streaming below!" FULL ARTICLE

"...The daily lineups for the coming New England Metal & Hardcore Festival have been finalized. Here’s who will be playing each date of the three day affair, which is to be held at The Palladium in Worcester, MA from April 17th-19th..." FULL ARTICLE

"Following a week-and-a-half November tour through the Midwest, Cop Problem will this week pack the van back up for a Northeastern mini-tour..Alongside brethren in Old Lines, this Friday, December 6th, Cop Problem will travel north to invade Danbury, followed by Brooklyn on Saturday, before returning to Philadelphia for a hometown throwdown on Sunday night. Stay tuned for additional tour actions to be announced into and through 2014." FULL ARTICLE

"...The tones on this 4-song EP are clear but live-sounding, as punk recordings should be. Urgency and despondence come in equal measure...FULL ARTICLE

"...Cop Problem's tour hits Brooklyn's Acheron on Saturday, 12/7, along with Passage, Capacities, Lords of Death, and Old Lines (who are also touring). Tickets are available. Stream all of Buried Beneath White Noise and check out the full run of Cop Problem dates below..." FULL ARTICLE

"I’m a firm believer that music can be used as a weapon of protest against the fuckers that want to downpress the poor of all colors around the world. In the world of corporate greed and apathetic youth, it’s rad to know that bands like COP PROBLEM have not given up the good fight. Their new EP Buried Beneath White Noise straight brings the ruckus and turns up the fury past 10! " FULL ARTICLE

"The Skinny: As Philly-based Cop Problem prepares to release their new Buried Beneath White Noise EP this week, the band today is streaming the white-knuckled bombast and venomous lyrical content of the opening track, "Bear Witness." FULL ARTICLE

"...Two crust/D-beat bands -- Philly's Cop Problem and Baltimore's Old Lines (featuring Mitch Roemer of Pulling Teeth and Ruiner) -- are going on tours this year and crossing paths for a few shows together along the way..." FULL ARTICLE

Philadelphia hardcore quartet Cop Problem are yet another example of the U.S.' dominance of melodic crust; .. Recorded by Will Yip, who's also handled Circa Survive and Paint It Black, Noise is four angry tracks of hardcore against complacency. Given the current state of American politics, it's highly appropriate that they would release a song titled "American Spring." No Gods, No Masters—even in the City of Brotherly Love. FULL ARTICLE

"I can’t front and I won’t front I fucking love when music is used as an weapon of protest & social justice! Philly’s COP PROBLEM bring straight politically charged aggression with their brand of D-BEAT that cuts at the throats corrupt pigs! Today CVLT Nation premieres COP PROBLEM debut video for their song Monuments taken from the band’s 2012 self-titled E.P. available on War Torn/Prejudice Me Records." Read Full Article

"This four-piece band from Philadelphia, PA throws down three brutally intense hardcore songs in around nine minutes and will blow you away..." Read Full Article

"Philly crust unit COP PROBLEM have freshly booked their newest DIY tour, beginning in just two days. The band will charge down the East Coast with a rash of shows along their voyage to the eleventh installment of the massive The Fest in Gainesville, Florida. COP PROBLEM will share the stage this Friday, October 26th with mainstays such as Asshole Parade, Code Orange Kids, DNF (members of Touche Amore, Trash Talk), Wild Tribe, and more, The Fest 11 set to feature over three hundred bands including From Ashes Rise, Negative Approach, Propagandhi, 7 Seconds, Anti-Flag, and Ceremony, to name just a few." Read Full Article

"COP PROBLEM has the blade of reality at the necks of the corrupt pigs! They released a gnarly EP earlier this year via Worn Torn Records (US) and Prejudice Me Records (Europe). It’s 3 songs and 9 minutes of unrelenting D-Beat" read full article

"Cop Problem have done themselves proud, bringing classic hardcore influences smashing into the present with relevant lyrics and cramming it into ten minutes of excellent punk." read full article

When a great deal of what passes for hardcore amounts to nothing more than macho posturing and hanging out with the bros, bands like Cop Problem continue to prove that it can be so much more. Highly recommended. read full article Read more: http://www.oldpunksneverdie.com/2012/05/18/quickies-1/#ixzz24gK8nxD5 Under Creative Commons License: Attribution Non-Commercial Share Alike

"Pardon me while I pick my face off of the floor, Cop Problem just sheared my grill off with this rager of an EP. Intense d-beat and crust influenced hardcore that slays and slays for every second of its nine minutes. This is an urgent, ripping blast of catharsis straight from the streets of Killadelphia and a must buy for fans of Converge, Trap Them and similarly styled hardcore." read full article.

NecroSlaughter.de breaks of a great review in German of our new EP - read full article

"Dewie from ThisIsNotAScene caught up with latest Hardcore band to scream out of Philadelphia, Cop Problem. After having taken a listen and offered some very positive words on the bands release of their self titled EP, it was only natural to chase Cop Problem down and talk music and how it fits into their culture in the Northeast." read full interview

OneMetal.com gives the new EP 4/5 "As a statement of intent, this self-titled release couldn’t be much stronger; it’s swift and dangerous" read full article

"..the monster that is Cop Problem has delivered three vitriolic tracks that have the same kind of impact as that of a nail spiked-baton tied to a wrecking ball falling from the sky.." read full article

"The whole EP bubbles with the same vitality that early Discharge and Cro-Mags had – uncontrived, politically astute, aural violence with the musical chops to match." - read full article

"This record provides us with 3 songs, showcasing the band's brand of high speed, angry composition. ..For fans of d-beat and thought provoking hardcore.." read full article

FAO everyone, this is your new favourite fucking band, get on it immediately. read full article

The furious 8-minute effort not only exemplifies the hardcore D-beat style, but also presents other elements you wouldn’t normally find in bands that are part of this type of scene..I reviewed their EP a couple of weeks back, and in an effort to further introduce this promising band to Metal Assault readers, here’s an interview I did with them.. read full article

The issues that punk screamed about are still here, and they are staring you in the face my friend... read full article

Across the three songs that make up Philadelphia's Cop Problem debut 7", the foursome remind us of what started the crust movement before the fashionistas sunk their claws into it, political punk rock. Political leanings aside, the band's brand of crust mirrors that of Tragedy, employing clean guitar leads to give the galloping d-beat and piercing vocals of Deb Cohen a melodic direction that you can hum along to... read full article

The quartet have shown their versatility on this debut EP, presenting a musical style that can only be broadly categorized, but in reality explores depths that are beyond the realms of conventional D-beat punk...Cop Problem have created a tremendous first impression on their debut EP, delivering a fantastic three-song burst. All in all, a splendid effort impossible to dislike.read full article

Based on name alone, I’m predisposed to liking Cop Problem. As it turns out, their self-titled 7″ debut (War Torn) lives up to the responsibility attached to such a bold, classic moniker. Like a more coherent Converge, the Philly quartet makes a sonic–and presumably political — statement with these three cuts. “Along For The Ride” hurts like a fat lip, while “Blinded By Power” daringly — or perhaps daintily — dips a toe into Sunny Day emo territory, though it returns to full ferocity in due course. - read full article.

Welcome COP PROBLEM, an energetic act born within the politically-motivated bustling underbelly of Philadelphia’s punk/hardcore scene, and ready to bust loose onto the rest of the planet with their debut EP. With a high-energy D-beat-infused punk rock delivery littered with rampant blasting hardcore/crust rage, COP PROBLEM have raided Philly live venues on DIY gigs as well as supporting national acts including Converge, Trap Them, Dropdead, Coke Bust, Resistant Culture, Leftover Crack and countless more since their mid-2010 inception. COP PROBLEM have just confirmed the completion of their self-titled debut 7″, now set for split release between Prejudice Me Records in Europe and War Torn Records for North America. The riotous three-song EP was recorded by Will Yip (Blacklisted, Converge, Paint It Black, Lauryn Hill) at Studio 4, and showcases the bands versatile, swift and devastating delivery. The cover art for the EP was commissioned to world-renowned artist/tattoo artist Jason Angst... read full article.

"..If you're into crusty, d-beat-laden hardcore, they'll be a favorite for you.." - read full article.